THE PHILIPPINES: Joining the rank of “innovation achievers”

In the recently released 2019 Global Innovation Index (“GII”) report, the Philippines saw a notable 19-place leap from the 73rd spot in 2018 to 54th this year. The GII, co-published by the World Intellectual Property Office (“WIPO”), Cornell University, and the Institut Européen d'Administration des Affaires (“INSEAD”) ranks the innovation performance of 129 countries based on 80 key indicators.

The improvement is significant considering that the Philippines languished at 73rd and 74th place in the last three years. It should be noted, however, that this year’s leap in rankings is due partly to data made available to researchers only recently. Last year’s GII report stated that five data values were missing in assessing the Philippines’ performance. Three of these were made available this year, including two top-performing areas where the Philippines ranks first (“high-tech net exports”) and fifth (“high-tech net imports”) against all other countries assessed in the GII.

Indicators relating directly to intellectual property (“IP”) awareness, protection, and commercialization form only a small fraction of the GII metrics. Other factors refer to political and business environments, human capital development, infrastructure, market sophistication and performance of allied industries. Focusing on the IP environment, the Philippines has made great strides in terms of university and industry research collaboration (rising 31 places to 25th). The state of cluster development (46th place this year) also saw an 11-rank difference from last year. These improved rankings perhaps reflect the less fragmented approach local industries are now taking towards innovation and technology. Nevertheless, the country’s overall efforts at commercialization remain lethargic. The country barely moved in terms of IP payments (Rank 55, from 56) and receipts (Rank 87, from 90). This suggests that the foundation for using IP as a growth driver in the Philippines is still far from ideal. With the exception of the number of utility models filed (Rank 15), the number of filings for patents (including PCT applications), trademarks, and industrial designs all fall below Rank 70.

Notwithstanding the seemingly low rate of IP filings based on the GII data, the latest statistics from the Philippine Intellectual Property Office (“IPOPHL”) report a steady increase in IP protection in the last few years. Between 2016 and 2018, the number of applications filed by residents increased annually, on average, by 39.75% for patents, 19.2% for trademarks, and 38.4% for utility models.

Mere IP protection, however, is not enough. The GII model levels or “scales” the number of registrations per country to make them comparable across economies. This is done by dividing it by the purchasing power parity GDP in international dollars, population, total exports, total trade, and so on. Thus, the number of registrations would arguably only be meaningful if these are examined alongside their commercial viability.

In this context, the Philippines’ scores highlight the divide between R&D creation, IP protection, and commercialization. A 2014 Science, Technology, Research and Innovation for Development (“STRIDE”) survey commissioned by the United States Agency for International Development (“USAID”), candidly reports the baseline challenges in the Philippines’ innovation ecosystem.

As regards the academic community, the survey found that “universities in general do not possess the specialized expertise to effectively market their patent portfolios for commercial use” and that “only a few have significant capabilities for assessment of commercial applications and marketing capabilities.”

The study also noted companies’ hesitation to enter into patent licensing with Philippine universities. Most companies would rather own their IP outright. The academe’s unrealistic valuation of their IP also lead to deadlocks in negotiations.

With respect to the enabling environment, the survey reports that “businesses complain that accounting firms have little experience in valuing pre-revenue companies and are not aware of relatively standard procedures for evaluating goodwill, intellectual property, innovative capital goods built in-house, and other intangibles. The deficiencies in these services disadvantage startups in acquiring operational financing, in risk capital transactions, and in company exits.”

Three years after the STRIDE survey’s publication, the IPOPHL still notes similar issues affecting the IP system. It found that university researchers’ “publish or perish” mindset deters patent protection. Professors would rather focus on publication where incentives are more immediate and less uncertain. The IPOPHL also reports that IP is largely perceived by the public as “esoteric and complex, understood only by a few”, “too costly”, and “not easily accessible especially from those in the regions.” Indeed, from these accounts, the appreciation of how IP contributes to the national economy must be improved. The follow-up to the STRIDE survey, due for release next year, would confirm whether stakeholder efforts have been effective.

To bridge the gap between R&D output and commercialization, two new laws supporting innovation were enacted. The Philippine Innovation Act of 2019 (Republic Act 11293) mandates the collaboration and engagement among business, the R&D sector and government to accelerate the implementation of the country’s innovation agenda. It provides for the creation of an “Innovation Fund” with an initial amount of One Billion Pesos (approximately USD52M) given to qualified innovative enterprises in the form of grants. Moreover, all banking institutions, whether government or private, are now mandated to set aside at least four percent of their total loanable funds for innovation development credit.

The Innovative Startup Act of 2019 (RA 11337), on the other hand, provides financial incentives and grants to startups by way of subsidies for business registrations and operational costs, and participation in local and international startup events. A “Startup Venture Fund” was also created whereby investments in Philippine startups will be matched by government-sourced or coordinated funds.

These laws, well-received as they are by the IP community, still have at their core a government-driven and initiated mechanism, anticipating that the academic and business sectors will catch up with, if not surpass, the government’s enthusiasm. It may also take time to implement these policies since they entail the creation of government committees which require funding. Further, these laws’ respective implementing rules still have to be drafted.

Even when fully implemented, the Philippine Innovation Act and Innovative Startup Act also only tackle some of the issues afflicting the innovation sector. While these laws attempt to address the problems of business environment, credit and investment access, innovation linkages, and clustering, there is still a need to incentivize IP protection and IP transactions. Separate efforts to address the currently meager expenditures on education and R&D. On the whole, despite innovation’s growing recognition as an economic driver in the country, the disjointed attention it receives leaves much to be desired.

Latest data from the UNESCO Institute of Statistics show that the Philippines’ total R&D expenditure is only 0.1% of the country’s GDP. This is a far cry from the 2.5% or upward investment of more developed countries in their R&D. Business sector participation in R&D spending in the Philippines is also only at 35.72%, with universities and government coming close behind at 33.72% and 29.73%, respectively. These pale in comparison to innovation-centric economies whose business sector inputs generously sit within the 60%-78% range, with their respective universities even spending twice, on average, the amount their governments put in.

There are many initiatives that indicate that the Philippines is on the right track. More local universities are creating dedicated Innovation and Technology Support Offices. Several have also integrated IP commercialization into their IP policies. The Board of Investments and the IPOPHL have recently entered into a memorandum of agreement to attract more innovation investments. The IPOPHL’s turnaround time from application to registration/grant has considerably improved in the last half decade, making it one of the fastest in the region. Additionally, government statistics reveal that the much needed assistance from agencies such as the Department of Science and Technology, IPOPHL, and the Department of Trade and Industry continue to attract potential innovators. This notwithstanding, more proactive participation from players in the innovation ecosystem is needed to sustain the country’s growth.

At the 54th spot, the Philippines still has a long way to go, but seeing where policy and collaboration are headed, and how far it has progressed in recent years, the Philippines has in its horizon a vibrant future in IP and innovation. 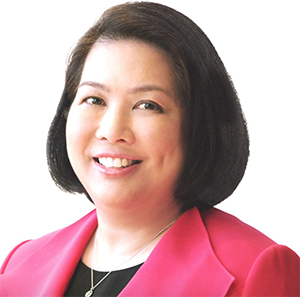 Ms. Bunye is the head of Cruz Marcelo & Tenefrancia’s Mining and Natural Resources Department and the Energy practice group. She is also a Partner in the Intellectual Property Department and focuses on trademarks and IP commercialization, including licensing and franchising, and the registration of food, cosmetics, and pharmaceutical products with the Food and Drug Administration.  She has spoken in many countries on IP licensing in the Philippines and is the author of the Philippines Chapter of International Licensing and Technology Transfer: Practice and the Law.