Nishith Desai Associates advised India’s Department of Economic Affairs, Ministry of Finance and Government of India on the legal, tax and regulatory issues in relation to setting up of the National Investment and Infrastructure Fund (NIIF), NIIF Trustee and NIIF Ltd., including its negotiations with potential investors of NIIF. India’s Finance Minister Arun Jaitley, announced the creation of the NIIF in the Union Finance Budget 2015-2016 on February 28 2015.

“The aim of the Fund is to pool commitments from sovereign wealth funds, long term funds based outside India and government supported institutions within and outside India as permitted under the AIF Regulations to subsequently utilize the same in making investments into the infrastructure sector,” said Nishith Desai Associates. “These investments shall include both, greenfield and brownfield projects. The platform could also consider investments into other commercially viable projects within the broader investment strategy of the Fund. It could also consider other nationally important projects for example, in manufacturing, if commercially viable.” 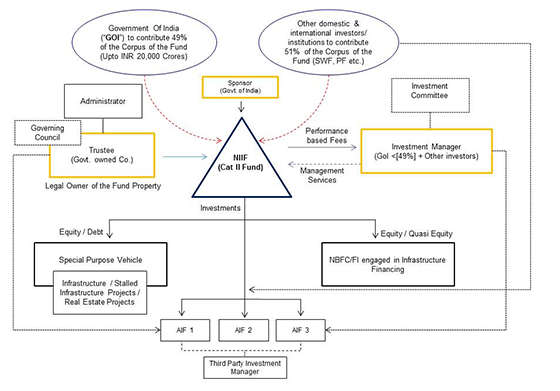 The finance minister will chair the NIIF’s governing council, which will also include the secretary of the Department of Economic Affairs, the chairman of State Bank of India and executives from private sector companies.

Nishith Desai Associates is highly recommended for capital markets and corporate / M&A in the 2016 edition of Asialaw Profiles.