When Hitachi design a nose cone for the Japanese bullet train using AI which improved aerodynamic performance and reduced cabin noise levels we realised that new era of innovation has arrived where creation would no longer be the handiwork of mankind but also of intelligent machines. Incidentally, the cross-bristle design of famous Oral-B toothbrush is believed to be the creative work of AI which results in better removal of plaque as compared to other traditional designs. The first AI based medical Device IDx-DR for Diabetic Retinopathy Diagnosis that utilizes artificial intelligence to diagnose eye disease in diabetic adults is an AI diagnostic system that autonomously analyses images of the retina for signs of diabetic retinopathy. This AI based Device is capable of screening patients for diabetic retinopathy using deep learning algorithms got US FDA marketing approval in 2018. Appearance of first AI based medical device in the market would perhaps be an early indication of the wave of AI to shape into high crest in future creativity and innovation in the medical field. The big Pharma giants like GlaxoSmithKline (GSK), Pfizer, Merck, Johnson & Johnson and Sanofi are also applying AI to predict molecule behaviour and determine if its drugs would be beneficial. The recent surge in the race for AI driven chatbots related patents like Google duplex, IBM Watson and Android Siri is indicative of the acceptance AI driven invention by patent office. Chatting with an AI driven devices/apps to name few like Amazon Alexa, the Google Assistant, Siri or Bixby is gaining acceptance. Shedding the technology barriers would make AI as a tool for creative innovation in every sphere but it will also raise many pertinent issues such as predictability, repeatability and subject matter eligibility under patentability criteria under patent Law.

Like any other invention, AI inventions must overcome section 2(1) (j) and section 3 requirements in order to receive patent protection in India. The product of AI for example could be a medical device/system or both the methods and apparatuses that perform the diagnostic analyses. So far as medical device/system based on AI are concerned there appears to be no issue relating to the patentability. However where AI medical patents applications are merely relating to the AI algorithms and the machines used to generate those algorithms the subject matter eligibility under section 3 may leave a question mark on patentability. Another AI driven diagnosis and prognosis field which is akin to process of comparing and extrapolating known images with the new cases by doctors or specialists which is finding acceptability in diagnostic circles just to get quicker and better accuracy that could not clear the subject eligibility bar in Mayo case in US may face patentability issue in India as well. There is yet to be a reported case of any refusal of AI driven invention as such in India except the refusal in general under section 3(k). But IPO may look west to apply section 3(K) to refused diagnosis based on medical AI algorithms and similarly placed algorithm for other technical fields.

Given the uncertainties posed by section 3(k) and section 3(m) when it comes to subject matter eligibility of AI related inventions — which at times is arguably one of most complex issue still troubling Indian patent examiners — it may become an unpredictable hurdle for patenting AI implemented inventions. Nevertheless, the WIPO reported application trends of 2015 clearly indicate Indian IPO as favoured destination for filing AI applications. The substantial growth in the number of patent filings in the field of AI also bring with it the inherent difficulties Examiner faces in disposing such applications. Though patent law does not differentiate between manmade products from products of AI but it still becomes questionable to grant patent for the latter category of inventions under section 3(k) and section 3(m). In absence of any clear interpretation of section 3(k) and Section (m) by Supreme Court well as their interpretations by the lower courts examiner is left with no option but to weigh the valuable insights provided by the patent practitioners to navigate through the complex and at times troubled waters of AI patentability. Another hurdle which creates suspicion with patenting of AI is the preconceived bias of the examiner that every product of AI would seek to either automate or replicate acts performed by humans and equating it with method of performing mental act exception under section 3(m). No doubt IPO follow and apply the “mental steps doctrine” in cases where claimed subject describes an act that can be performed through an “ordinary mental process”, “in the human mind”, or by “a human using a pen and paper” which in fact is akin to Alice Vs CLS Bank test in US.

This is perhaps the only area where there seems to be no hurdle as such for grant of patents. Many patents were granted for embedded machines even before the section 3(k) exceptions were brought into force in India just for the reason that embedded software makes the traditional computer work in certain manner as dictated by the programed software. In certain cases newly created embedded system solves the old problem in a new technical way. In yet another situation patents were granted where use of the software and electronics conjointly find solution to new technical problem. Leading example of embedded systems are laser control solutions, anti-dazzling systems, GPS tracker and systems. However, the significant amendment proposed in its patent law amendment Ordinance [Ord.No 7 of 2004] under section 3 viz  “(k) a computer programme per se other than its technical application to industry or a combination with hardware;” which remained in force for a short life was an attempt to codify the law on software patent by allowing patents on computer programs with technical application to industry or a combination with hardware. This qualification was later omitted in 2005 amendments but exclusions of computer programme per se was kept leaving enough leverage for grant of patents on inventions other than computer programs as such. With this being state of affairs the patents on AI driven invention would surely find favour with the Indian patent office as well, subjected to narrow restrictions of section 3(k) and section 3(m).

AI guidelines in other IP jurisdictions

USPTO being the most progressive IP system that is always keen to keep pace with the emerging technologies, issued guidelines for examination of patent application based on Artificial intelligence and machine learning. Similarly EPO also published Guidelines in 2018 for Examination of “Artificial intelligence and machine learning” (G-II 3.3.1). These guidelines in fact guide the examiner to assess whether an invention on AI and machine learning has the requisite technical character to be patentable. Indian Patent office guidelines for the examination of computer related invention do have similar assessment requisites like presence of technical advancement to clear section 2(1)(ja) and section 3 (k) hurdle. Indian Patent office should also issue clear guidelines relating to patentability criteria of AI driven inventions as issued by other IP offices.

AI Machine — better known as “thinking machines” — are going to shape the future of creativity and innovation. Recent use of these machines in diagnosis, drug molecule identification, treatment and drug development would mark a new era of medical innovation. In order to meet the crest of AI innovation impact on India Niti Aayog published a strategy paper in June 2018 to highlight inter alia the challenges before the IP regime “especially in respect of applying stringent and narrowly focused patent laws to AI applications – given the unique nature of AI solution development. Niti Aayog also suggested for establishment of IP facilitation centers to help bridge the gap between practitioners and AI developers, and adequate training of IP granting authorities, judiciary and tribunals. Although there is no ‘bulls eye’ method for obtaining patent in relation to AI inventions but a well devised approach to claim drafting could be useful in improving your chances to fetch patent protection the AI inventions deserves. Interestingly, South the Korean Intellectual Property Office recently included accelerated examination process for patent applications pertaining to AI. In Indian context this accelerated process of examination is also available for Start-ups seeking patent protection. It is heartening to note that 120 start-ups have already received patents under expedited-examination process and its number is growing. 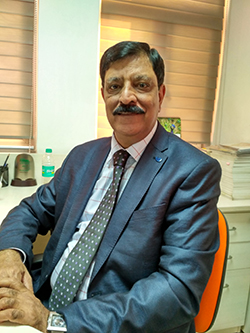 Mr. D.P.S Parmar heads the IPAB Practice Group at LexOrbis. After joining the Intellectual Property Appellate Board (IPAB) as Technical Member (Patents) in 2011, he has been instrumental in writing some path breaking and insightful decisions on Indian Patent law issues including those that established legal positions on excluded subject matters under Section 3(d), 3(i) and 3(k), divisional applications, disclosure requirement under Section 8, working statement, compulsory license, to name a few. Before joining IPAB, he worked with the Indian Patent Office (IPO) for over 27 years and had played a vital role both at the administrative and policy levels. He represented India at various rounds of discussions organized by the WIPO and attended follow programs at the European and Japanese Patent Office. He was instrumental in recognition of IPO as 15th ISA and IPEA under the Patent Cooperation Treaty (PCT). He also held additional charge as Head of Intellectual Property Training Institute (IPTI) at Nagpur, which was responsible for providing training to the new Examiners at the IPO.