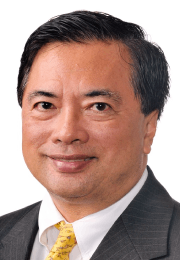 Mr. Medalla has been described in Chambers Asia Pacific 2015 as, “widely held in ‘very high regard’ as one of the country’s leading tax practitioners,” having been listed as a Band 1 practitioner since 2008. He has also been consistently cited as a leading individual in tax practice by the Asia Pacific Legal 500 since 2009, and by Asialaw.

Mr. Medalla’s tax practice has run its entire breadth, to include tax compliance, tax planning, advice on the tax aspects of business transactions, ruling requests, refund claims, estate planning, and the determination of customs duties applicable to importations. In particular, he has extensive experience in handling tax litigation before administrative agencies and the courts.

In his corporate practice, he has provided advice on the structuring of investments and transactions, the establishment by foreign companies of a Philippine presence and the acquisition of Philippine businesses through stock and asset sales. His clients have included those in the insurance, gaming, mining and oil and gas industries.

Mr. Medalla was a professorial lecturer in Taxation at the University of the Philippines.

Partner and Head of Tax Department