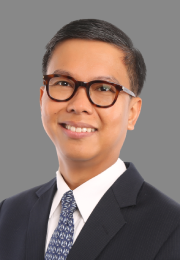 Mr. Recalde is a Partner and Head of the Tax Department of ACCRALAW. He is a Certified Public Accountant who ranked 11th in the 1996 CPA Licensure Examinations and ranked 3rd in the 2002 Philippine Bar Examinations.

Mr. Recalde is a recommended lawyer in the areas of taxation and corporate and special projects with more than 19 years of experience. He is an advisor to various types of businesses including those registered with investment promotion agencies. Mr. Recalde has been involved in several mergers and acquisitions, loan negotiations, and corporate restructuring transactions. He represents clients in administrative investigations before the Bureau of Internal Revenue, appeals to courts from administrative protests, claims for refund of local and national taxes and in cases involving violations of the tax code.

Mr. Recalde is involved as the tax counsel in the following matters:

Taxability of the Poverty Eradication and Alleviation Certificates (PEACe) Bonds which was resolved in by the Supreme Court En Banc in Banco de Oro et. al. v. Philippines (G.R. No. 198756, 15 January 2015)

Nature and taxability of Philippine Depositary Receipt (PDR) transactions in the Philippines involving high-profile clients Maria A. Ressa and Rappler Holdings Corporation, before the Court of Tax Appeals and Regional Trial Court involving alleged violations of the Tax Code.

Tax Advisory to Metropolitan Bank & Trust Company (MBTC), one of Philippines’ biggest banks, with respect to its claims as creditor of the insolvent ship-building company Hanjin Heavy Industries and Construction Philippines

Representation and tax advisory to Subic Water & Sewerage Co., an entity operating under of the Subic Special Economic and Freeport Zone

Advisor to the Banker’s Association of the Philippines in relation to the validity of Revenue Regulations No. 4-2011
Advisor to Light Rail Transit Manila in relation to its local business tax